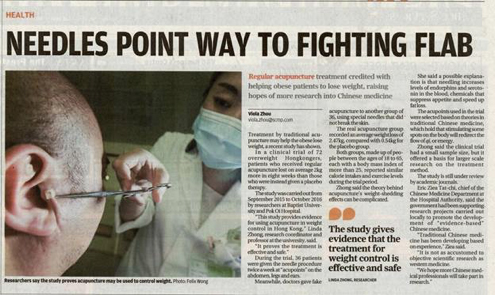 Treatment by traditional acupuncture may help the obese lose weight, a recent study has shown.

In a clinical trial of 72 overweight Hongkongers, patients who received regular acupuncture lost on average 2kg more in eight weeks than those who were instead given a placebo therapy.

The study was carried out from September 2015 to October 2016 by researchers at Baptist University and Pok Oi Hospital.

"This study provides evidence for using acupuncture in weight control in Hong Kong," Linda Zhong, research coordinator and professor at the university, said.

"It proves the treatment is effective and safe."

During the trial, 36 patients were given the needle procedure twice a week at "acupoints" on the abdomen, legs and ears.

Meanwhile, doctors gave fake acupuncture to another group of 36, using special needles that did not break the skin.

The real acupuncture group recorded an average weight loss of 2.47kg, compared with 0.54kg for the placebo group.

Both groups, made up of people between the ages of 18 to 65, each with a body mass index of more than 25, reported similar calorie intakes and exercise levels during the trial period.

Zhong said the theory behind acupuncture's weight-shedding effects can be complicated.

The study gives evidence that the treatment for weight control is effective and safe.

She said a possible explanation is that needling increases levels of endorphins and serotonin in the blood, chemicals that suppress appetite and speed up fat loss.

The acupoints used in the trial were selected based on theories in traditional Chinese medicine, which hold that stimulating some spots on the body will redirect the flow of qi, or energy.

Zhong said the clinical trial had a small sample size, but it offered a basis for larger scale research on the treatment method.

The study is still under review by academic journals.

Eric Ziea Tat-chi, chief of the Chinese Medicine Department at the Hospital Authority, said the government had been supporting research projects carried out locally to promote the development of "evidence-based" Chinese medicine.

"Traditional Chinese medicine has been developing based on experience," Ziea said.

"It is not as accustomed to objective scientific research as western medicine.